Amazon  and the other sites https://books2read.com/-WrongPlace 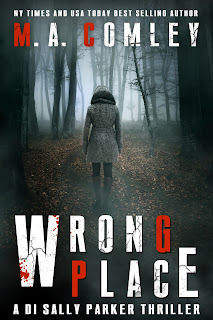 
He watched her serve and flirt with the other customers. Periodically, she flashed him a toothy smile, showing off her flawless white teeth, which glistened under the lights directed at the bar. He returned her smile and added a wink for good measure. He knew women like her wanted to feel special. The pretty woman, who had insisted that he call her Brenda, fluttered her eyelashes at him as colour highlighted her slightly plump cheeks.


Another half an hour, and he would need to be on his way. The question was: had he achieved what he’d set out to do? He received his answer when she topped up his drink. She leaned in close and whispered seductively, “I should be clear of this place in forty-five minutes, Scott.”


He raised an eyebrow and grinned. He was always amused to hear the girls call him Scott. “What are you suggesting?”


“You know. Surely, I don’t have to spell it out for you. You seem an intelligent enough man.”


If only you knew! He glanced at his wrist and tapped his watch. “The thing is, I have an early start in the morning. Any chance you can get off sooner?”


Her eyes widened, and she peered over her shoulder at the other staff members, who were milling around or flitting between the bar and the kitchen area. “I’ll see what I can do.” She gave him a wink.


Scott resisted the temptation to punch the air. He placed a hand over Brenda’s as she pushed his pint towards him. “You won’t regret it. You have my word on that. I’ll drink this and wait for you outside in the car park.”


She smiled nervously and withdrew her hand. “Okay. I’ll look forward to that.”


During the next ten minutes, he noticed her clutching first her head, then her stomach. Finally, another barmaid, a motherly looking woman, asked if she was all right.


“Actually, I feel like shit. Not sure I can continue tonight. Do you think Greg would mind if I called it a night? I’ve been tidying up as I go, so there shouldn’t be too much mess to clear up once the final punter goes home.”


“Go on. I’ll cover for you, love. Dan is on nights tonight, anyway, so there’s no need for me to rush home. You should check with Greg first, though.”


Scott had heard enough. He downed the rest of his pint and slipped out of the pub. He moved his car around the corner, out of sight of any cameras, and waited. His palms were greasy with sweat as he anticipated Brenda’s arrival. Five minutes later, she appeared in the doorway of the pub. He thumped his horn once to gain her attention.


Brenda trotted across the pavement to meet him. The engine roared into life as she opened the door and fell into the passenger seat. “Where are we going?” she asked breathlessly.


“I know a nice spot down by the river, or we could go back to my hotel if you like?”


“The river sounds more romantic.” She giggled like an excited teenager.


Scott inserted the CD he’d picked out especially for the trip, and the soothing voice of Luther Vandross filled the car. Brenda leaned back against the headrest and began humming to the tune. Everything was going according to plan.


Ten minutes later, they were parked on the edge of the softly flowing river at Acle, a pretty, touristy site that he knew well. He switched off the engine then twisted in his seat to face her. With his gaze fixed on hers, he unclipped both of their seatbelts and slowly ran his hand up her bare thigh. The way she was dressed and her welcoming smile had attracted him the most at the beginning of the evening.


“Hey, slow down, honey.” She flirtatiously slapped his hand away.


He knew what type of games women liked to play before they spread their legs for him. However, for some reason, he was eager to get down to business. His hand swiftly disappeared up her skirt. She sucked in a startled breath. The whites of her eyes lit up the car. He covered her mouth with his and felt her succumb willingly to the desire he was bestowing upon her.


Scott recognised a go-ahead when he saw it. He climbed across the gear stick and straddled her, pinning her to the seat. She couldn’t object, as his mouth was busy toying with hers. His tongue crept between her gaping lips, and her guttural moan reverberated against his mouth. He knew there was no turning back—this woman was his.


She tugged at his shirt, and he did the same to her blouse. The lust-filled frenetic pace of young lovers overtook them. Before long, both of them were naked, no mean feat in the confines of his car.


“You’re beautiful.” He trailed his tongue along her heated flesh. His head spun when she moaned, and her hips gyrated anxiously beneath him.


His hands clasped her throat gently as he took her. Once their rhythm was in sync, his grip tightened, constricting her airway. Brenda tried to push him off, but he was too heavy. She bit the edge of his lip. He cried out, released one of his hands, and slapped her face. Brenda whimpered like a baby in between gasping for breath as his hands tightened around her slim neck again, this time with more intent.


His release came not long after, as did hers, when her life ebbed away beneath his hands.


Scott took a few moments to recover his breath. Then he casually pulled on his clothes, ignoring the lifeless form lying beside him. He started the car and drove a few hundred yards down the road towards what would be the woman’s final place of rest.


Pick up your copy from these retailers today.