Read the first chapter of The Missing Children: 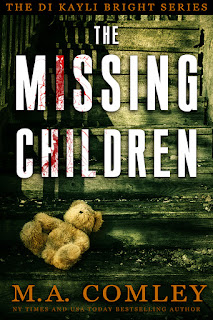 
Sinead followed her boyfriend, Jeremy, through the derelict house with the crumbling walls, shuddering at all the cobwebs dangling from the discoloured ceilings. The wallpaper, what was left of it, dated back to the fifties, and the large bold flower pattern had faded over time. One panel in particular had peeled away from the wall and hung to the floor. “Do we have to go any further? This place is giving me the creeps.”


“Where’s your sense of adventure? You want to do the same thing every time we meet up, but do you hear me complaining? We’re nearly there now. It’s not as if it’s a big house.”


“Thank God. It will be worth all this hassle in the end, won’t it?” Her voice came out barely louder than a whisper.


He chuckled. “Believe me, babe, it’ll be worth it. I have a surprise for you that you’ll be talking about for years to come.”


Sinead gulped loudly. She was even more terrified, not just of the creepy surroundings, but because she had a feeling her boyfriend was expecting her to surrender her virginity to him there. She could think of better places than this shithole, but if it meant holding on to him, she knew she would have to put out. She had a feeling he was keen on the new blonde girl in their class; Sinead had caught him staring at her a few times during maths. If she didn’t give him what he was craving, he would move on to pastures new.


Jeremy cleared the cobwebs at the top of the stairs. He looked down into the cellar then at Sinead. “Cool, I’d heard there was one down here. I love cellars, ever since I saw that horror film where Dracula lived in a coffin in a cave-like cellar. Looks like we’re in for a real treat, babe.”


Sinead backed up a couple of paces. “Oh no, I hate cellars. I can’t go down there, Jeremy. Please don’t make me. This place is creeping me out. My heart feels like it’s going to spew into my mouth any second.”


“Coward. Come on.” He grabbed her hand tightly and began to descend the stone steps.


Sinead dug her heels in, but when he turned and scowled at her, she relented and followed him down the stairs. The stairwell was dark until her eyes adjusted, aided by the light from the tiny window at the bottom of the stairs. Something crunched under her foot, and she glanced down to see she’d just squashed a huge woodlouse. She wasn’t about to lose any sleep over that, but the same thing couldn’t be said for the spooky depths of the cellar that awaited her. The smell of damp earth hit her nose, making it twitch. Christ, this guy has a lot to learn about romance if he expects me to put out down here. “Jeremy, please? It’s too scary for me. I don’t like it.”


He tugged on her arm, refusing to let her go, and continued down the stairs with a grunt of displeasure. She’d heard rumours about his reputation—if he didn’t get what he wanted from a girl, he would dump her and move on to the next one. That thought devastated her. She was in love with him.


She bumped into his back at the bottom of the stairs. Although it was good to be on solid ground, she shuddered and glanced around the vast area. Some areas were darker than others the farther they ventured away from the window. Sinead let him guide her, and when he stopped suddenly, she barrelled into him a second time.


“What is it? What have you seen?” she whispered urgently, her heart pounding rhythmically.


“Ssh! Stay here.” He let go of her hand, but she grabbed his hand again quickly.


“All right. Keep schtum and don’t piss me off.”


They slipped deeper into the darkness. Sinead tried but failed to prevent her body from trembling as they stepped into the unknown abyss. Be brave. I mustn’t show him how scared I am. She peered into the darkness ahead of them and saw the outline of something against the far wall. Holy crap, what’s that?


“Seriously, I need to take a closer look. You stay here. Nothing is going to harm you. I’ll be three feet away. That’s all.”


Sinead let out a shuddering breath and nodded. She watched him ease his way into the darkness. Her breath caught in her throat when the blackness enveloped him before her eyes adjusted to the light again.


“What the fuck is this?” he said angrily.


“What? Jeremy, you’re scaring me. What have you found?”


“Quiet, let me concentrate. There’s something here. Not sure what it is.”


Furious with herself for not thinking of it earlier, Sinead reached for her phone and switched on the torch. Jeremy looked her way and shielded his eyes against the light, then they both turned to the object that had drawn his attention. Sinead screamed and almost dropped her phone in her haste to escape the cellar.


She halted at the bottom of the stairs and hesitantly returned to where he was standing, barely a foot away from the sack. “Why would anyone put a sack there?”


Jeremy approached the hessian and spun it around. He gasped.


Sinead slid up behind him and peered over his shoulder. “What is it?”


A large red splodge coated one side of the sack. “I think it’s blood.”


“Oh no!” Tears of frustration misted her eyes, but she rubbed them away angrily. “Do you think there’s an animal inside?” The thought of an animal being tortured and thrown in a sack really upset her. She hated any form of animal abuse.


He took another step forward. “There’s only one way to find out.”


“And say what? We found a sack with blood on it?”


“Please, Jeremy, don’t touch it. I’m scared, too scared for this. We need to get out of here.”


“That’s morbid. It’s obvious something is dead in there. I’d rather not know what it is.”


He laughed then proceeded to unhook the sack. “Ugh… it’s heavier than I thought it would be.”


Sinead gulped and took a step closer. She watched as he loosened the knot at the top of the bag.


She didn’t get the chance to see inside the sack before he began pushing her towards the stairs. Witnessing the terror in his eyes was enough to tell her that he’d discovered something far more sinister than he’d bargained for. “What was it?”


“Just get out of here. Stop pissing around and move.”


Her legs wobbled, as if they’d turned to jelly, but they scampered out of the cellar almost on their hands and knees in their haste to get away.


He grabbed her phone and punched in three numbers. “Yeah, I want the police. I’ve just discovered a body.”


Sinead’s eyes almost popped out of her head. She switched off from what Jeremy was saying to the operator. A body? What sort of body? That sack wasn’t nearly big enough…


He handed the phone back to her and led her through the house to the outside. “We’ve got to wait here for the police to arrive. Shit! Sinead, it was… it was a child!”


Sinead covered her face with her hands and sobbed. She felt Jeremy’s arm slip around her shoulder before she crumpled to her knees in the wet grass. Who would do such a thing? A child!
Grab your copy on Amazon today.