Read the first chapter of Sole Intention - A Psychological thriller 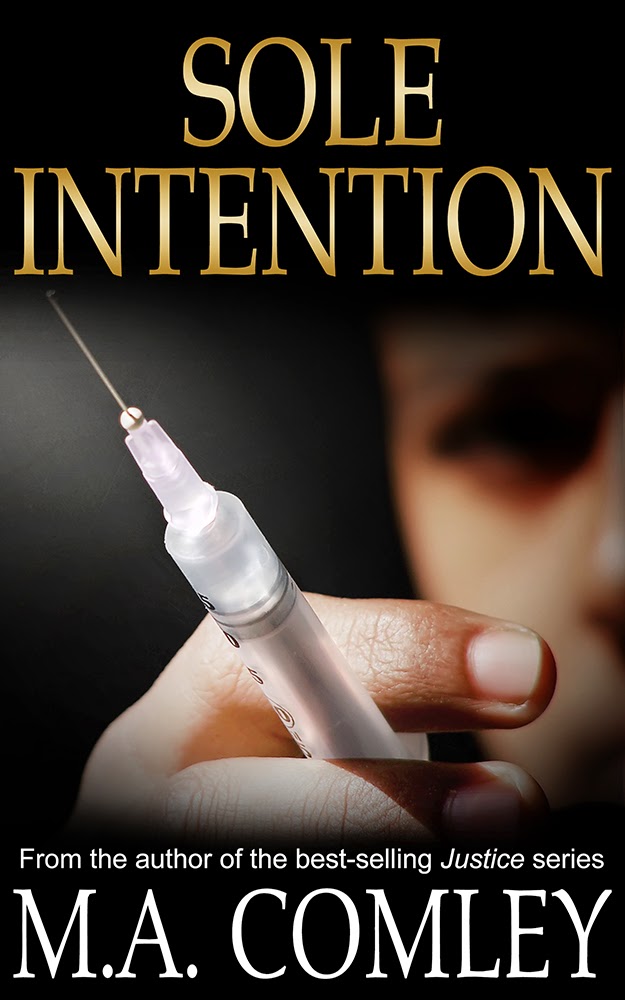 Sweat poured from her brow. Her clothes clung to her as she ran for her life through the ink-black forest. She’d already bumped into several tree trunks while looking over her shoulder for him.
Why me? Why is he so desperate to kill me?
She tripped over a half-hidden log and landed in a pile of autumn leaves, but she was up running again within a few seconds. Her life depended on it.
Stop thinking and just run!
She could hear him tracking her—the sound of crunching undergrowth getting ever nearer. She had no place to hide. Is that why he brought me here? Of course. The question was: would she ever leave this place alive?
Another stray branch slashed her cheek, distracting her. As she tumbled over a large fallen tree trunk, her heart almost shuddered to a stop. She tried to get up and continue running but winced as a sharp pain shot up her leg. She looked down at her ankle. It hung at an odd angle. “Fuck! Damn and fuck.”
The noise of leaves rustling behind her made her turn her head sharply. She didn’t see the flat head of the shovel until it was inches from her face.
“Run from me would you, bitch?”
Stars danced through her terrified brain. She tumbled back into the damp undergrowth, but her attacker quickly yanked her upright again and slammed her back against a wide tree. Everything was a daze, except the way he was glaring at her. She felt the rope slither around her torso, then groaned when it tightened, pushing the air out of her burning lungs. “Please don’t hurt me,” she whispered, fear tearing at her vocal chords.
“You shouldn’t have run. Now I have no choice.”
“Yes, you do. Everyone has choices.” She tried to reason her way to survival. Right then she would have done just about anything to save her life. “Please, I have money, savings in the bank. Take it. Have it all… but please don’t hurt me.” Saltiness from her tears slipped into the corner of her mouth.
“I don’t want your money. I wanted you.”
“Then have me. We’ll go away together. You scared me. That’s why I ran. Please, give me another chance. I won’t mess up again. I swear.” Her words forced confusion to travel across his face.
Is he debating setting me free? “We’ll be good together, once I get to know you properly. It takes me a little while to get used to people. Please give me that chance.”
The confusion gave way to anger. His eyes creased up until they formed tiny slits in his tanned face, and his lip curled with intent. “If I set you free now, you’ll only run to the police and give me away.”
“I won’t. I promise. Give me a chance. Give us a chance,” she implored, desperation lacing her words.
“You had your chance. Nobody makes a fool out of me. Many women have tried before, seen me as some kind of joke, to their cost. I thought you were different, but when it comes down to it, you’re all the same. Full of your own self-importance. Preening yourself to attract us men. Then, when you’ve snared us, you cast us away like a used tampon.”
She had never thought of herself in that way and really wanted to challenge him. However, she was conscious that would only make matters worse. She turned her head to the side and mumbled an apology.
His hand shot out and clasped her throat. “What did you say?”
He had cut off her airway, so she couldn’t speak even if she wanted to. She could feel the air disappearing and felt light-headed as his grip tightened. Her eyes fluttered shut, and her family’s faces filled her oxygen-starved mind. Bye, Mum, Dad, and Cheryl. I’ll never be able to share good news with you all again. Please don’t grieve much for me. Go on with your lives. Never let the bitterness of what he’s about to do to me destroy your lives like he’s destroying mine. I love you all… until the end.
He let go of her throat, and she gulped air as if it were an endangered commodity.
He held her hand in his, touched it affectionately to his cheek, then looked her in the eye as he crushed her fingers between his. She’d never felt so much pain in her life, and she screamed until her voice dried up.
“Scream all you want, bitch. No one will hear your desperate cries out here.”
She sobbed and whispered through dry lips, “Get it over with. Kill me.”
“Oh, I will. Not yet, I intend to make you suffer first. This is just the beginning of what I have in store for you, bitch.”
He stood up and towered over her. Her gaze remained focused on the tree stump opposite. She could make out, formed in its bark, her mother’s beautiful smiling face, giving her the courage to be brave. When she looked around, she realised that he’d vanished, leaving her alone and vulnerable to the four-legged creatures of the forest. The sobs came and increased in tempo as she came to the conclusion that even though he hadn’t killed her, it wouldn’t be long before she died a horrible death out there. Alone.
Lost deep in thought, she neglected to hear his return. She jumped when he taunted her with his vile words.
“Say your prayers, bitch.” Something glinted in his hand, and her eyes opened wide before the object sank deep into her flesh. “Your life is about to end.”
She tried to scream, but her voice box proved to be raw and uncooperative. The third time he struck her, she drifted into a welcome unconsciousness. The blackness surrounding her quickly gave way to the brightest light she’d ever witnessed. She moved towards it and breathed a sigh of relief. I’ve arrived… He can no longer hurt me.

or in ebook from the following retailers: