New release and a Q&A with the wonderul author Carmen Amato.

I've been a long time admirer of Carmen Amato's intelligently written novels. I'm delighted to have a Q&A with the successful novelist today as she celebrates the release of yet another Detective Emilia Cruz novel, Pacific Reaper. Pick up your copy today for the introductory price of only 99p/99c.

Take it away Carmen... 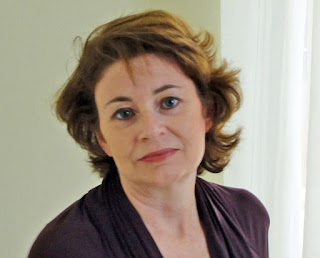 Melanie, thank you so much for hosting me. I love talking to fellow mystery authors; I always learn something new.


I write romantic thrillers and the Detective Emilia Cruz police procedural series. When I’m not writing, I love reading mysteries. I think it started way back when, with Robert B. Parker’s Spenser series, but lately I’m drawn to series in more exotic places including Michael Stanley’s Inspector Kubu series in Botswana and Colin Cotterill’s Dr. Siri Paiboun series set in Laos. But I’ll drop everything for a new Jo Nesbo; in addition to great writing, Oslo is one of my favorite cities.


During your childhood who was your biggest influence?


I’m lucky enough to have grown up in New York living next to my maternal grandparents. My grandmother was the family matriarch and I loved spending time at her house. I have great memories of watching The A Team and Riptide with her. No doubt, this is what launched my love of the mystery and action//adventure genres.


Are you fortunate enough to write full-time?


Yes, I’m a full time writer. I thought that when that happened, I’d glide through life in a sparkling home, wearing dresses and pearls, having oodles of time to get my nails done and taking a yoga class every day.


Instead, the house is as cluttered as it ever was, the dog complains that he doesn’t get enough attention (an endless task), and I’m wearing jeans while yelling at my computer screen. I’ve become addicted to sticky notes, plotting how to kill hapless characters, and Starbucks’ Italiano blend.

I usually take an afternoon break at 3:00 pm when my local television station airs an episode of the BBC classic  As Time Goes By. The series is on an endless loop; as soon as Judy and Alistair get married we go back to episode 1. I can quote swaths of dialogue.


If Hollywood came knocking who would you want to play your main character?


Hollywood did come knocking, much to my mingled trepidation and excitement. Last year a major US network bought the option to produce a television series based on the Detective Emilia Cruz mystery series.


Emilia is the first female police detective in Acapulco, taking on Mexico’s drug cartels and culture of machismo, which also trying to have a personal life that includes Kurt Rucker, an American hotel manager.


I don’t know who might play the main character, but a strong Latina like Jennifer Lopez, Michelle Rodriguez, or America Ferrera could carry it off. Kurt is a tall, blonde, former US Marine, and triathlete. Any actors to suggest?


What one piece of advice have you found the most important in your writing career?


Ahhh, the infamous piece of advice every newbie author dreams will pave the writing road to success. Here’s how mine went:


FAMOUS AMERICAN AUTHOR: “But the novel is set in Mexico. All the characters are Mexican.”


ME: “That’s right. Lives of the people fighting the drug cartels. And Mexico’s class structure.”


FAMOUS AMERICAN AUTHOR: “New York will never touch it And a New York agent is the only kind worth having. New York agents are looking for the next Sex and the City. Glossy. High heels. New York.”


ME: “This is a romantic political thriller. Makes the real Mexico accessible to the American audience the way Martin Cruz Smith’s Arkady Renko series did for Russia.”


FAMOUS AMERICAN AUTHOR: *sniff* “New York won’t buy a book with all Mexican characters. And your main character is a maid. At least couldn’t you make her American? You know, a college girl from Pittsburgh named Susan or Tess who goes to Mexico on a cultural exchange program to work as a maid for a semester.”


This was about 5 years ago and the conversation was about potential agents for my first novel, the romantic thriller THE HIDDEN LIGHT OF MEXICO CITY.


I could have tossed off a barbed remark about how it would cost an American in Pittsburgh more to get to Mexico than they would earn as a maid in three months, but I was too busy being appalled.


This was a book about Mexico’s drug war, the people fighting it, and their chances of survival. It was also a Cinderella story taking on Mexico’s unspoken caste system. Sue and Tess were not part of that narrative.


I decided to ignore the FAMOUS AMERICAN AUTHOR. I published without an agent, and in the long run have found it much more important to know a good intellectual property rights attorney! 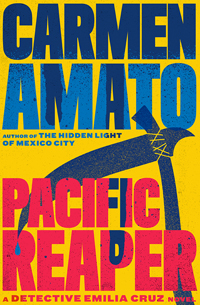 
For starters, I’m leaving the house clutter where it is. My family doesn’t care and the dog hasn’t done anything constructive since we got him.


With PACIFIC REAPER, the fifth book in the Detective Emilia Cruz series just out, I’m already outlining 43 MISSING, which will be next in the series. Three Emilia Cruz short stories are also in the works, all of which take place before the events in CLIFF DIVER, the first novel.


The audiobooks of the first 4 novels in the series will be released by Tantor Media in 2017. Johanna Parker, who was the voice talent for the Sookie Stackhouse series, will narrate.


I’m also editing the forthcoming nonfiction INSIDER’S GUIDE TO THE BEST OF MEXICO and working on a fun memoir of my college days in Paris entitled GIRL MEETS PARIS.


Plus, I have the Mystery Ahead newsletter to keep me busy every month. Readership has been growing like crazy and I’m really committed to putting out a quality product. Every edition has something for both mystery readers and writers: writing protips, books reviews, author interviews, etc.


Thanks so much for hosting me. Readers are invited to join me at any of the links below: