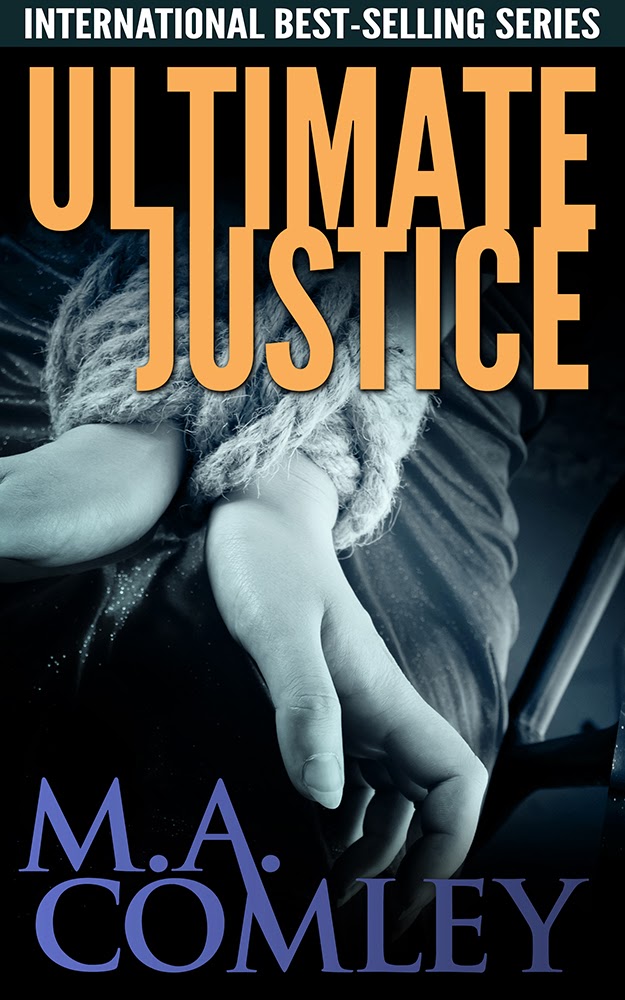 You can purchase Ultimate Justice from all retailers:


5.0 out of 5 stars Wonderful Addition to the Series March 29, 2013
By ~DJ Faz~
Format:Kindle Edition|Amazon Verified Purchase
I am sitting here dabbing my eyes. Grab a box of tissues before you reach the end of this book.

I have heard some people say that this is the final book of this series. All I can say is I hope not! Ultimate Justice is a perfect addition to the series; the story is strong, the characters continue to remain engaging. Anyone who hasn't read The Justice Series is cheating himself.

5.0 out of 5 stars Another Great Comley Book April 1, 2013
By Mary E aka Lockette
Format:Kindle Edition
This 6th book of the Justice series is another fabulous, fast read. If you liked the others, make sure you set time aside for this one. Once you start, you won't want to stop reading. The whole cast of your favorite characters are back, even Pete having his say here and there! The main plot keeps you guessing at who the bad guys are and how Lorne will get herself out of the deadly situations only she can worm her way into. Comley also has fantastic back stories going on, which is one of the things I love best about her books; they are filled a variety of plots to take your emotions from one extreme to the next. Download this book now and get ready for a book filled with mystery, thrills, fun, surprises, friendship, psychics, and tears. Gotta love Lorne!

5.0 out of 5 stars An exciting conclusion to the Justice series,
By
Mrs. L. Morley (Wales) - See all my reviews
(REAL NAME)
Amazon Verified Purchase(What is this?)
This review is from: Ultimate Justice (Justice Series (Book #6)) (Kindle Edition)
Another great story from the pen of Mel Comley. Lorne and her ex MI16 husband solve another heinous crime involving the trafficking of young girls. I read this book in a day because I couldn't put it down. I can only hope that we haven't really seen the last of Lorne and Tony.

5.0 out of 5 stars More Please!,
By
harasrrek "harasrrek" (Fife,Scotland) - See all my reviews
Amazon Verified Purchase(What is this?)
This review is from: Ultimate Justice (Justice Series (Book #6)) (Kindle Edition)
A ship sinks taking it's human cargo with it. Lorne is determined to bring the perpetrators to justice little knowing the danger involved and how close to home it will come!
I love how Lorne is so much more than just a private investigator, she shares her life as a mother, wife, daughter, kennel owner and ex-cop with the reader and this brings so much more to the story.
In my personal opinion this is the best of the series yet,as ever the plot is tight and action packed and the more I learn about the characters the more I like them.
I know this is meant to be the final book in the series but I hope for the readers' sake the author will change her mind.

5.0 out of 5 stars Box of tissues needed! April 6, 2013
By Miss K. Jenkins
Format:Kindle Edition
Another brilliant installment in the Justice series by the fantastic Mel Comley!

Lorne Simpkins is back, with her ex-MI6 husband Tony, hunting down the bad guys and kicking a**! We also see more from her dad, Sam, her daughter, Charlie, and her ex-partner Katy!

Dealing with the story of a ship carrying girls being abused in a human trafficking ring, it's a little difficult to read at times, but Comley deals with the subject brilliantly - enough detail to make the story hard-hitting, but not enough to make you want to put the book down!

This book should come with a warning though - without giving away any spoilers, be prepared to cry at the end! Have a box of tissues handy!

A brilliant end (but hopefully not!) to a fantastic series, with lovable characters and exciting story-lines. Will be sadly missed!

5.0 out of 5 stars fantastic. 7 April 2013
By vicki
Format:Kindle Edition|Amazon Verified Purchase
well this was book 6 in a series that i've trully enjoyed reading.
I'm a little sad that this is probably the last in the series, although we can live in hope for another one one day.
A great read, i didnt want to stop reading, i needed to carry on to see what was happening, but as i got towards the end i didnt want to read because i knew once i finished it that was it...lol..

May i suggest a box of tissues for when you get near the end, and maybe reading it on your own, not in public..lol

Thanks again Mel for a fantastic series, i just cant wait to see what you write next. looking forward to the new book...


5.0 out of 5 stars 5 star suspense 10 April 2013
By kittycat 2000
Format:Kindle Edition
When a wrecked ship is found to contain the bodies of 25 young Asian girls Lorne is determined to investigate in spite of reservations from both her husband and father. She teams up with former colleagues DS Katy Foster and DCI Sean Roberts and soon finds herself in serious danger.
This is another great story showing the tenacity of Lorne even in the face of great risk to herself. I was delighted to see some of her Met colleagues as well as the wonderful character that is psychic Carol Lang. Along with the newspaper reporter who gets a shock when meeting Tony for the first time she adds a little light relief to the story. I sincerely hope that we haven't yet seen the end of Lorne and Tony.
More please Mel.


5.0 out of 5 stars Powerfully moving book from Prologue to End April 26, 2013
By Linda S. Prather
Format:Kindle Edition|Amazon Verified Purchase
One of the things I've loved about the Justice series--I skipped no pages. I've followed DI Lorne Simpkins from Cruel Justice to Ultimate Justice, and it's been a thrill ride all the way.

Starting with the Prologue I knew I had another mystery/thriller on my hands, but the first several chapters had me slightly confused at first. Lorne, now settled in with her new husband, Tony, and father Sam, were trying to build their private investigation business while saving dogs and finding homes for them. As a dog lover, this endeared Lorne even more to my heart, and I loved this small trip through her personal life. I feel as though I know her already, but seeing her in her home setting with family was in many ways a small treat. I did, however, wonder where that detective I've grown to love went.

Then it happened. A news story of a shipwreck, bodies on the beach. A young house maid with swollen eyes and a hidden secret and Lorne was back up and running with her former partner Katy, and a somewhat misguided and unfortunate reporter.
M. A. Comley takes us on another thrill ride, right into the dark side of human nature. Lorne, hot on the trail with Katy by her side discovers things that she can't ignore. Which is one of the things I love about her. She rushes in to save the innocent, protect those who can't protect themselves, even at her own peril.

Be prepared to smile, to laugh, and finally to cry. A powerfully moving book from prologue to end.
I would rate this book R--for violence and sex. It deals with a subject matter that some find offensive, but is a reality we all must face as it does happen. If you love a good thrill ride and a strong female character who also isn't afraid to show her softer side and be a wife, mother, daughter and friend, I highly recommend the Justice series. If you're a former Justice fan, you'll love seeing Pete again, if only for a moment.

5.0 out of 5 stars Ultimate Justice 26 April 2013
By S. Morris
Format:Kindle Edition
This is another excellent mystery from Mel Comley. I've found that the books in this series have gotten better and better as the series developed and I think Mel has excelled herself with this latest (and possibly final) `Justice' book.

Following a shipwreck on the Kent coast, the bodies of a number of Asian girls are found on board and Lorne Simpkins feels compelled to investigate.

The mysteries in Mel's books are always compelling--and this one, touching as it does on the emotive subject of people trafficking is no different. As well as Lorne we get welcome re-appearances from old characters such as Katie Foster as well as some intriguing new ones such as a journalist who teams up with Lorne and Tony.

As I've said before, one of the strengths of these books is the excellent characterisation. This ensures the reader is routing for the characters and really feels the tension when they are put in dangerous situations.

Mel has indicated that this will probably be the final book in the series--and she certainly ended the series on a poignant moment that I'm sure will sadden many long-term readers of the series. I hope Mel Comley can be persuaded to write another book featuring these wonderful characters soon.