Killer on the Run

Read the first chapter of Killer on the Run today. 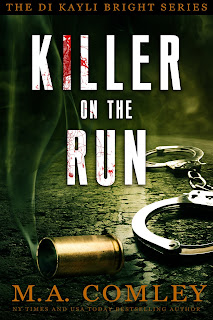 
Carmen raised her glass of orange juice and chinked it against her friends’. Dawn and Sonia beamed at her over the rims of their glasses. They had been friends since school, welcoming and celebrating each other’s triumphs along the way, and that night, they were there to celebrate Carmen’s promotion at work.


“To the new supervisor to the mortgage advisor,” Dawn said, slurring her words more than a little, which wasn’t surprising after the number of drinks she’d thrown down her neck over the past few hours.


“Hear, hear! Congratulations, Carmen,” Sonia said, then she leaned over to whisper, “You’ll soon be stepping up into Warren’s shoes.”


Carmen laughed. “I doubt that will happen. Hey, I need to drink this and be on my way. Some of us have important work to do in the morning.”


“Ooo… get you! We have important roles in life too, you know. I doubt you would have achieved your promotion without our valuable input. Your hair was a damn mess last week before you visited the salon, and don’t even get me started on your nails. Frankly, I’ve seen better nails on a Labrador.”


Carmen’s eyes widened. “Hey, great analogy—not. I know I couldn’t have done this without you girls always being by my side. We’ve supported each other, since—what? We were five or six? I’d be lost without you.”


Dawn elbowed Sonia. “Oh gosh, here she goes, getting all emosh on us.”


Carmen sipped her drink and searched for a hankie in her handbag. She dabbed at her eyes, trying to keep her mascara intact. “Shut up! Stop taking the piss. Isn’t a girl allowed to get emotional now and again with her best mates? You guys are like family to me.”


Sonia put down her glass and mimed playing a violin with her arms. “Aww… here she goes.”


Carmen laughed, gulped down the rest of her drink, and stood up. “I have to go. Are you sure you two don’t want a lift home?”


“Nope. The night is still young for us yet. We’re not wimps… like you.” Dawn sniggered mischievously.


“Charming! If I didn’t have an important meeting to attend in the morning with my, er… new boss, I’d stay on and party with you. Anyway, I’m going to love you and leave you. Do you want to meet up on Saturday? I’d like to try out that new Indian restaurant that’s just opened up on the edge of town, if you’re up for it? Apparently, it’s receiving great reviews online.”


“Phooey! You don’t want to take notice of bloody reviews. This early on, half of them will have been written by the owner’s friends anyway,” Sonia slurred.


“Oh, go on then. I could do with eating a curry for a good clear-out,” Sonia said, shocking the other two girls.


“On that note, I think it’s time I was leaving. Thank you for a fabulous evening as always and for helping me to celebrate my success. You girls rock.” Carmen pecked her two friends on the cheek and walked towards the pub’s exit, where her car was parked at the rear.


The night was inky black, and the sky was littered with tiny stars to guide her way. Before she could open her car door, she heard sudden footsteps behind her, causing her heart rate to escalate. She gulped and closed her eyes, fearing that someone was about to assault her. Then she remembered a self-defence lesson the building society had insisted she attend. The instructor had instilled in them how much damage a car key could do if it was jabbed in the right orifice. Swiftly, she manoeuvred her key in her right hand and turned, raising her hand, ready to use the key. She blew out a relieved sigh when she saw Dawn standing behind her. “Jesus, babe, you almost had my key in your eye. Why didn’t you call out or speak to me?”


“Sorry. It took all my energy and strength to remain upright after all the wine I’ve drunk this evening.”


Carmen hugged her with relief. “Idiot. Did you forget to tell me something?”


Dawn leaned against Carmen’s car with a thud, misjudging how close she was to the vehicle. Carmen stifled a giggle. Dawn despised it when people laughed at her drunken antics. “I didn’t want to ask in front of Sonia. What did Lincoln say?”


Carmen’s gaze drifted down to her feet, and she kicked out at a nearby stone. “Umm… I haven’t told him my other secret yet.”


“What? Why? It’s been weeks since you found out.”


“I know. I’m building up to it, hon. One thing at a time. Let him get used to my promotion first, then I’ll tackle the other subject.”


Dawn pushed away from the car and flung her arms around Carmen’s neck. “It’s your call. I’ll be here to support you, no matter what happens. Love you now and for always.”


“Love you now and for always, too,” Carmen repeated the little ditty they had frequently said to each other for the past ten years or so. “Go, you better get back to Sonia now. She’ll be wondering what’s going on otherwise.”


“Give me a ring tomorrow,” Dawn shouted over her shoulder as she weaved her way back to the pub through the parked cars. “Shit! That was my frigging toe.”


Carmen laughed and slipped behind the steering wheel of her car. She started the engine and pulled out of the car park and onto the B-road that ran past the pub, which was on the outskirts of town. She turned up the volume on the car stereo, filling the inside of the car with One Direction. Her fingers tapped along to the music on the steering wheel as she drove. She switched on the heating as a sudden chill washed over her. That’ll teach me to go out wearing a flimsy dress, thinking it’s still summer. The autumn equinox had just passed, which meant the nights were definitely becoming colder with winter just around the corner.


She travelled along the bypass that led to her house, a tiny two-bed she’d bought when she was only twenty-three. She had saved hard to find the deposit, but property in the Bristol area had rapidly increased in value since she’d taken the plunge to put down roots. Dawn and Sonia had slated her at the time, called her daft for having mortgage repayments around her neck at such a young age. That had all changed recently, though. They had both intimated that they were regretting their decision not to get on the property ladder sooner, like she had. They shared a two-bed flat in an unsightly tower block in the city. It had been erected back in the sixties and should have been condemned years ago.


Something in the rear-view mirror caught her eye. Her gaze flicked between the road ahead and her mirror. Maybe it was a bright star? There’s nothing there now. She travelled another half a mile or so before she saw the same bright light again. This time it didn’t disappear but remained behind her.


Idiot! It’s a damn motorbike. Relieved that it wasn’t some kind of UFO and that she wasn’t about to be abducted by aliens, she relaxed, and her fingers began tapping to the beat of the music once more. Every now and again, her gaze drifted to her mirror to find the light still behind her, keeping a safe distance.


Her favourite tune filled the car, and she upped the volume a touch. Sitting back, she saw the light had disappeared again. How strange. We haven’t passed any turn-offs yet. Maybe they changed their mind and turned around to head back after taking the wrong road.


With the bike no longer distracting her, she focussed on the meeting ahead of her in the morning. For days, she’d been making notes for the presentation she was expected to give. The words started to run through her mind, blocking out the music. Then something caught her eye in the rear-view mirror again. The damn motorbike was back… and getting closer. Maybe it’ll overtake me now. I wonder where it went before. Either way, I hope it goes past me soon.


As her turning was coming up soon, Carmen kept one eye on the road and the other on the motorbike. The bright headlight was coming closer and closer, lighting up the interior of her car. All right, buster, get on with it. Go past me. It’s not as if you haven’t got the room.


Suddenly, the driver began to swerve, drift from one side of the lane to the other. “What the hell are you doing?” she shouted, her eyes drawn to the driver’s shenanigans rather than the road ahead.


The bike eased off the accelerator and dropped back a few feet. She blew out a relieved sigh, but that relief didn’t last long. The bike came hurtling towards her again. Distracted, Carmen veered off course and slammed into the barrier. A scream lodged itself in her throat as the car descended the steep incline. Carmen swallowed the bile filling her throat, and finally the scream erupted. “Please, God, help me!”


The car struck something hard, and it began to roll the rest of the way down the embankment. Thoughts of her dearly departed mother and father entered her confused mind, and she wondered if they would be there to greet her when she finally came to rest. “I don’t want to die. I have too much to live for. Please, someone help me,” she cried out, her voice juddering.


The car gained momentum, tumbling down the steep slope, until it finally came to an abrupt halt, resting on its roof. Her seat belt cutting into her shoulder, Carmen was drifting into unconsciousness, many questions running through her mind. The one that stood out the most was whether someone would find her. And when.