Read the first chapter of In Plain Sight today. 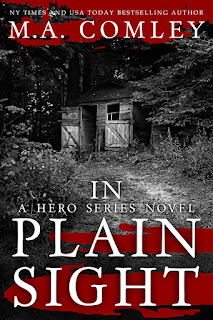 
“We’re in pursuit of a dark blue Renault Laguna, heading west on the B5229. Looks like he’s trying to get to the M602. We need urgent assistance,” Constable Paul Wilmot shouted into his police radio above the roar of the patrol car’s engine. He glanced sideways at his partner, Chris Portman. “Stick with him, mate. I’m getting the impression he’s bloody guilty of something.”


“Think you’re right there. Let’s hope one of our guys can cut him off before we reach the M602.”


The chase went on for several miles. The Laguna almost hit a woman and her child on a pedestrian crossing, as well as nearly knocking an elderly gentleman off his bike.


“Wait…he’s slowing down. Maybe he’s realised we ain’t about to give up.” Portman went through the gears, slowing down at the same time as the Laguna, until both vehicles came to a halt in a nearby lay-by.


“Damned considerate of him to pull up like this.” Wilmot smiled, grabbed the handle and exited the car.


Portman applied the handbrake and switched off the engine but cursed when the car’s tyres squealed and the driver of the Laguna sped off. Wilmot ran back to the patrol car and threw himself into the passenger seat then his partner put his foot down and took up the pursuit once more. Again, the driver exceeded the speed limit, and he tore the wing mirrors off several parked vehicles.


“He’s a bloody madman. Where the fuck are the backup teams?” Wilmot cried in frustration.


His partner replied by pressing down harder on the accelerator. The car lunged forward, and within seconds, they were a few yards behind the Laguna.


Wilmot turned sharply, his eyes wide in fear. “Do you think that’s wise? Why don’t we just tail him until the other teams arrive?”


“And when’s that likely to be?” Portman asked.


The car jolted forward again, bumpers touched, and both sets of tyres squealed before the two vehicles pulled over once more.


“Get out and grab him before he has a chance to take off again. I’ll block his path,” Portman ordered, slowing the car down enough for his partner to jump out.


Wilmot pushed open the passenger door and ran towards the Laguna. He tapped on the car’s tinted window with his truncheon. “All right—enough is enough. Get out of the vehicle, buster,” he said, glancing sideways to see his partner drive past to block the car.


The driver inched down his window as Portman approached the vehicle to join his partner. Both police officers waited for the window to wind down fully, but the driver was toying with them. The automatic window slid up and down, the officers glared at him, infuriated by the driver.


Wilmot tried to open the car door, but it was locked. “Come on, open up.”


Still no response from the driver.


When the window rose again, Portman tapped on it with his truncheon a second time. “Open up, or I’ll smash it in.”


“Oh shit!” Wilmot shouted when the end of a sawn-off shotgun appeared at the top of the window.


The gun went off. Wilmot’s face exploded under the force. He dropped to the ground. Portman looked on, stunned for a second or two, then he turned to run back towards the patrol car.


The Laguna’s door creaked open behind him, and the force of the bullet hitting his back propelled him forward onto the boot of his vehicle. He groaned and slid off the car onto the tarmac.


Bob Myers stood over the first officer and pulled the trigger. The copper’s brains spilled onto the road. He walked towards the patrol car and turned over the second copper. He was still alive, writhing in agony, the blood seeping from the gaping wound in his lower back.


“Please, help me,” the officer pleaded, reaching out a shaking hand.


Myers laughed. “Why the fuck would I want to help you? Where’s the fun in that?” He aimed the shotgun at the copper’s head. The officer instinctively closed his eyes, accepting his fate, the gun went off. The man’s skull shattered into tiny pieces, the Bob cocked his head into the air, listening for the sound of approaching sirens. He ran back to his car, shunted the patrol car out of his way, and put his foot down. Looking in his rear-view mirror at the carnage he’d caused, he laughed. “That’ll teach you to try and mess with me, suckers. Maybe you tossers will start taking me seriously from now on.”