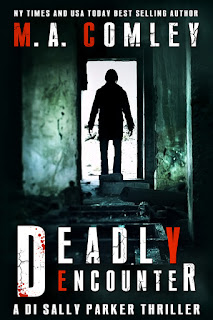 
Fear clawed at Anne’s throat. She glanced over her shoulder for what seemed like the hundredth time in five minutes to find the man was still chasing her and getting nearer.


Why didn’t I cry for help when I was able to? No one is going to hear me out here. The muscles in her legs burnt and felt as heavy as concrete. Doubt clouded her mind. Have I got enough energy to outrun him? Her lungs were on fire, and her breath had been labouring for a while. She scanned the industrial unit the man had forced her to turn into and shook her head. Nothing. No form of help.


No one is going to find me here, not at this time of night. Please, God, if it’s my time to die, make it swift and painless. Let me drop down dead from a heart attack rather than let this beast get his hands on me.


Beads of sweat trickled down her forehead and dripped into her eyes. She coughed, her throat parched from her exertions. The inkiness of the night sky grew blacker the deeper she ventured into the unit. Should I confront him? Ask him what his problem is? Why is he chasing me?


Distracted by her thoughts, she stepped on something, and her ankle buckled immediately. Her fall felt as if it were happening in slow motion. The palms of her hands slid along the hard, uneven pavement, and she wasn’t quick enough to prevent her chin from hitting the ground. Tears of pain mixed with frustration quickly formed. Within seconds, her stalker was standing over her, his own breath ragged.


She turned to face him, shocked to see a familiar face. No, it can’t be. I must be wrong! As her eyes adjusted to the dark, she peered closer then gasped. “Why? Why were you chasing me?” Anne sat upright and pushed herself up on her feet, only for the man to shove her back onto the ground with a mighty force. She’d never suspected he was so strong.


Her fear escalated, threatening to cut off the air to her lungs. She’d known him for years, and he’d never spoken to or treated her so roughly before. “What… what do you want from me?” her voice trembled. Did I really say that?


“It’s obvious, or are you truly that dense?”


“Why are you talking to me as if I’m a piece of dirt?” Her concern wasn’t with what was about to happen to her, only why.


“I’m in charge here, not you. Just shut up for once. You’ve always liked the sound of your own voice, haven’t you?” He bent down and swiped her hard across both cheeks.


She gulped. His rage confused her to the point that she really had no idea what to say or how to act. If she shouted and showed anger, the punishment he was about to mete out might be that much worse. She’d read somewhere that if a woman spoke gently to a man who was intent on attacking her, it would likely baffle him or make him come to his senses and realise that he was making a huge mistake. “Please, why are you doing this? Let’s talk this over before you do something that you’ll regret.”


He leaned down, placing his face inches from hers. Hot breath tickled her cheek. “You talk too much—you always have. Why do you insist on making this worse than is necessary?”


Petrified, Anne decided another tack was called for. After all, she had nothing to lose, except her life. Her gaze met his. “I’ll do anything you want, but please don’t hurt me. Think of the children. They need me. I need them. I want to be there when they move up into secondary school. When they start dating or consider getting married.”


He struck her again, harder than the previous time. The blow took her breath away. “I told you to shut up.” He withdrew a knife from his jacket pocket. Its blade glinted with reflected moonlight.


She raised her hands in front of her. “Please, please don’t hurt me. For the children’s sake, I beg of you.”


“Your children will be better off without you. I assure you.”


Tears began to cascade down her cheeks, and she brushed them away swiftly with the back of her hand, refusing to show him how broken and weak she had become. “How can you say that? No child should be without their mother to guide them through the early part of their lives. Please, take what you want from me and let me go home to my babies. They need me.”


He took a step forward. His gaze never left hers as he towered over her. The knife rose into the air at the same time a blood-curdling scream left her mouth.


Please God, let someone hear me.


She felt the tip of the knife puncture her neck then sink into her chest. Several thrusts later, her body could stand no more, and she fell backwards, smacking her head on the ground. With her children’s adorable faces prominent in her mind, she took her final breath.